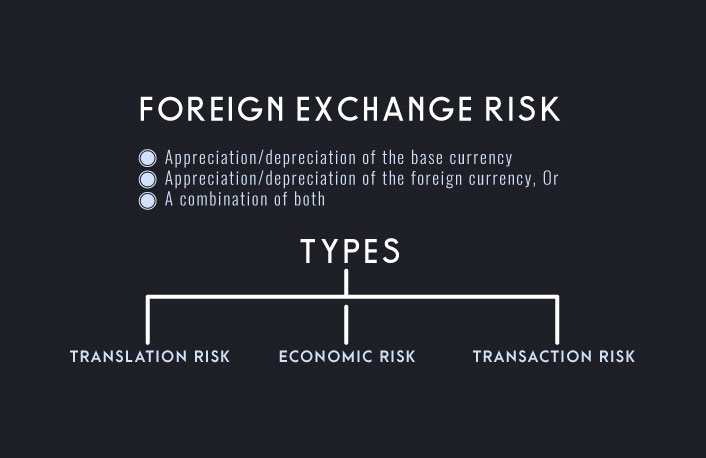 Foreign exchange risk, also known as exchange rate risk or currency risk, is the risk that can have a huge financial impact on the financial performance or financial status of a business entity due to changes in exchange rates between two currencies.

Foreign exchange risk can be caused by:

We can classify foreign exchange risk into three types. These are :

Translation risk is usually higher when a company holds a higher portion of its assets, liabilities, and equities in a foreign currency. This type of risk is also known as accounting exposure or translation exposure.

Economic risk refers to the long-term movement in exchange rates caused by changes in the competitiveness of a country. Macroeconomic factors such as geopolitical instability and government regulations are most probably the reasons behind such type of risk. Economics risk is also termed as forecast risk.

Transaction risk is the foreign exchange risk that arises from transactions between two parties in which the normal transaction currency of each party is different and the transaction involves a future receipt/payment between the two parties.

This types of risk is a two-way risk, and exposure to risk can lead to either losses or gains from movements in an exchange rate.

The time lag between transaction and settlement is essentially the source of transaction risk.