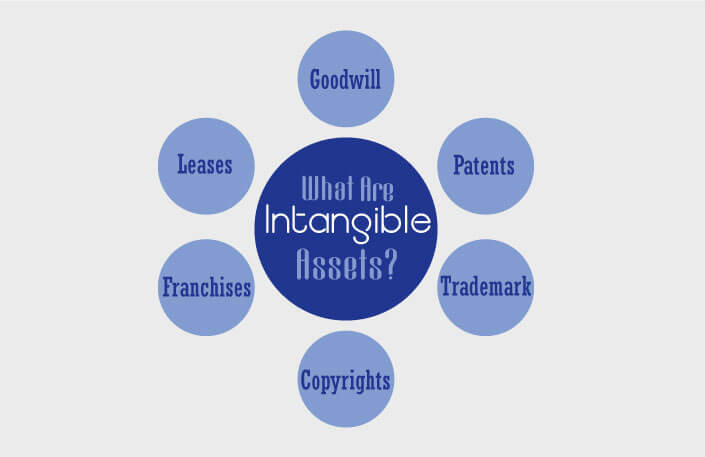 What are Intangible Assets?

Intangible assets are long-lived assets useful in the operations of business. We call them intangibles because they do not have physical existence. They have a useful life of greater than one year and are not held for sale. Examples of intangible assets include goodwill, patents, trademark, copyrights, brand recognition, etc

We have listed down more examples of intangible assets for a basic understanding. “IAS 38 sets out rules on the recognition, measurement, and disclosure of intangible assets”. IAS 38 applies to all intangible assets, except those that are within the scope of another standard.

The useful life of an intangible asset is categorized in two ways,

In the case of intangible assets with a finite useful life, the company has to assess its useful life as it is either 5 years, 10 years, or whatever it may be. They include patents and copyrights. As an example, the useful life of a patent is almost 20 years.

An intangible asset with indefinite useful life has no foreseeable limit to the period over which the asset is expected to generate net cash inflows. They have no expiry date at all. They include goodwill, trademarks, or brands.

Identifiable intangible assets are those assets that are capable of being separated or divided from the company, and sold, transferred, licensed, rented, or exchanged.

These include intellectual property, patents, copyrights, trademarks,  and trade names.

Unidentifiable intangible assets are those that could not be separated physically from the business entity. Internally generated goodwill is a common example.

A company can acquire intangible resources in a number of ways. They might be:

IAS 38 provides more detailed guidance on how the recognition criteria and measurement of assets in different circumstances.

We record intangible assets in the balance sheet. However, before recording, we are required to follow some requirements as stated in IAS 38.

A business entity can record intangible assets that are only purchased or acquired. Internally generated assets are prohibited to record in books of accounts because they are not identifiable (The internal costs of producing these items cannot be distinguished separately from the costs of developing and operating the business as a whole).